Since July 2016 when the Emergency Abdominal Surgery Course (EASC) was held locally in Lough Eske Castle Co Donegal, delivery has taken place in a number of countries worldwide including Sri Lanka, Brazil and Madeira.
2017 to date has been busy as the EASC was held in Cork, Ireland in February and was delivered to over 200 medical students at two venues in Ireland (Letterkenny, Jan 2017 and Dublin March 2017).
Later this year will see EASC delivery taking place in Greece (May 2017), in Calgary, Canada (June 2017) and Auckland, New Zealand (July 2017).
The flyer for the 18th EASC being held in Calgary, Canada on 14th June 2017 is downloadable here
Further details on EASC can be found here

Click here to download a flyer for the 10th Emergency Abdominal Surgery which is due to take place on April 1st, 2016. 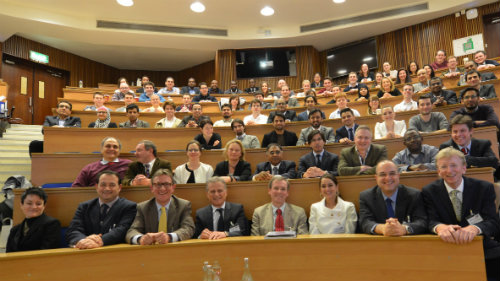 The participants, mostly from Ireland but some from Italy, raved about the course and the manner in which it was delivered. As one surgical trainee stated “Never been at such an excellent meeting, perfect organisation! Thank you”. The course was attended by a small number of nurses which Mr Sugrue feels is so important in selecting the team approach to care.

Mr Michael Sugrue from Letterkenny University Hospital, who developed and chaired the course, was proud that such an initiative (now in its 4th year) was leading emergency surgery care training around the world. The course was first run in Letterkenny in 2012; it will run this year in Asia, South America and next year in North America. Mr Sugrue said he would love to be able to run the course in the Donegal Clinical Research Academy’s newly designed auditorium, which has planning permission but needs further capital funding before it can proceed.
The Chair of Donegal Clinical Research Academy Trust Henry McGarvey said it will improve outcomes for those attending with acute abdominal conditions, such as appendicitis, gall bladder disease and bowel cancer.
The next course will be held in Donegal on July 25th where remarkably 40 of the world leaders in surgery will come to the North West.